One of the most notable Kobe colorways Nike Basketball ever produced, the “Chaos” was inspired by Heath Ledger‘s legendary portrayal of the Joker in 2008’s The Dark Knight, a role that garnered a posthumous Academy Award for Best Supporting Actor. Bryant was a noted fan of the film and how Ledger fully immersed himself in the Joker role — an understandable connection, as the Los Angeles Lakers guard was similarly obsessive in his approach to the game of basketball. This manifested itself in the “Chaos,” a physical, powerful representation of Kobe’s need to achieve his goals at all costs.

Deep and rich backstory aside, the “Chaos” presents a movie-inspired look that’s undeniably striking. Its fused synthetic upper features a slightly iridescent purple base, accented by white trim and a white midsole. Neon green appears on the tongues’s sheath logo badges, heel clip’s Kobe signature, midfoot Swooshes and outsole. Rich burgundy is present on the laces, midsole’s speckled detailing and heel, while a slate grey collar, throat and toe cap bring everything together. Combined, these colors provide a nod to the menacing hues worn by the Clown Prince of Crime.

As this is a Protro release, the tech has been upgraded for the modern-day game as well. The upper’s construction is simplified for a more comfortable feel, but retains its signature Flywire for support. The Zoom Air cushioning unit encased in the forefoot’s rubber folds has been doubled in size, and the midsole’s EVA foam is softened. Last but not least the outsole’s traction pattern has been scaled down to allow for more court contact. 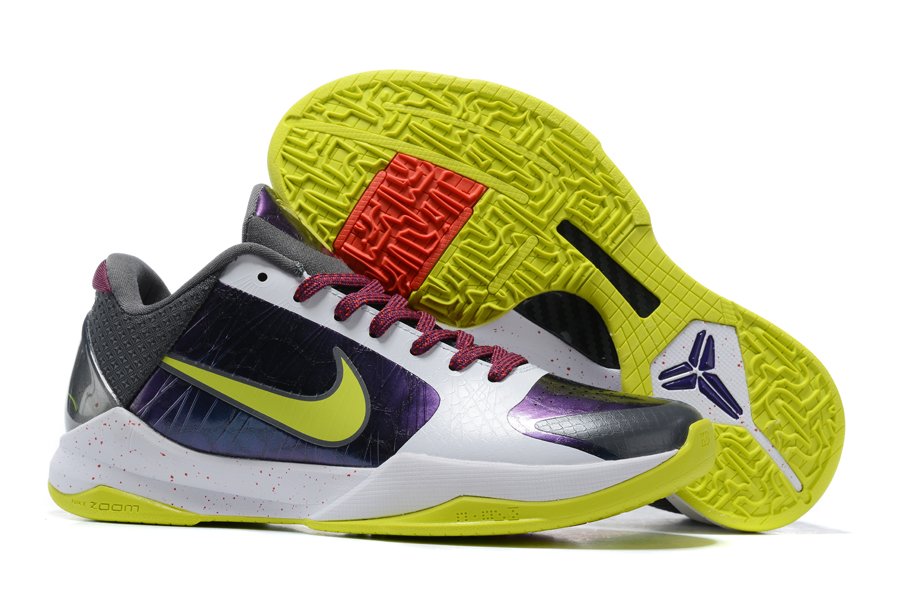